Western Iowa Energy is a Leader in the Biodiesel Industry

Western Iowa Energy (WIE) in Sac County is a major driver of the rapidly growing biodiesel industry as a BQ9000 Accredited Producer capable of generating 45 million gallons annually. Their accreditation attests they have passed a rigorous review and inspection of their quality control processes by an independent auditor.

Biodiesel is a cleaner-burning fuel that is nearly carbon-neutral; meaning it contributes almost zero emissions towards global warming. It is renewable, environmentally friendly, sulfur-free, and displaces imported petroleum.

“We are helping many states hit their carbon reduction goals by reducing the carbon intensity of emissions,” said Bradley Wilson, WIE President/General Manager. Mr. Wilson is also Chairman of the Iowa Biodiesel Board, Secretary of the Iowa Renewable Fuels Association, and sits on the California Advanced Biofuels Alliance board.

Additionally, Iowa legislators are considering a much needed biofuel standard that would help keep Iowa at the forefront of both carbon reduction goals and economic development by taking into account the other states that have passed legislation on biofuel policy.

WIE also owns and operates Agron Bioenergy in Watsonville, CA. “The facility can take in biodiesel by rail from our production facility in Iowa, then load out to trucks in the California market gaining valuable credits from the California Air Resources Board (CARB) low carbon fuel standard program,” said Wilson.

WIE has the ability to turn multiple feedstocks into biodiesel due to their specialized pre-treatment facility. “Being flexible by design, we can use a wide array of Iowa feedstocks above and beyond soybean oil to make our biodiesel from, such as recycled cooking oil from restaurants and animal fats from the meatpacking industries, as well as being capable of using many other waste oils and fats,” said Wilson.

Wilson credits this flexibility and knowledgeable leadership to WIE’s fifteen-plus year success. “We have a Board of Directors who know the industry inside and out — most of them helped create the industry.”

The biodiesel industry in Iowa saw success in 2020 even amidst the market challenges presented by the COVID-19 pandemic. Plants managed to bump up production to 351 million gallons despite only nine of Iowa’s 11 biodiesel plants being in operation. In fact, 2020 proved to be the second highest year of biodiesel production in Iowa history —  just behind the 365 million gallons produced in 2018.

WIE is just beginning a project to quadruple its rail spur size on the Canadian National Railway that will allow railcars of feedstock to be unloaded and utilized on site. “We received a $500,000 no-interest loan grant through the IDOT,” said Wilson. “We needed more space for many reasons, but two of the biggest reasons were so we could receive feedstock in by rail instead of just by truck, and also to store railcars in slow times. Now we have them scattered across the country and it takes many days or weeks for them to make it back to us when the demand picks back up.”

“Sac County is a great rural Iowa county in regards to business growth, good schools, numerous recreational facilities, and parks and trails,” said Wilson. “Operating a business in a progressive small rural county in Iowa has been great. We have the infrastructure that is needed and required to compete with the large-industry-oriented municipalities and counties throughout the world.”

WIE employs 31 in Wall Lake, IA and is conscientious about giving back to the community. Early during the pandemic in March 2020, WIE sent glycerin to the state of Iowa to be used by Iowa Prison Industries for the production of hand sanitizer during the national shortage. The finished product was shipped free of charge by the state of Iowa for priority use. 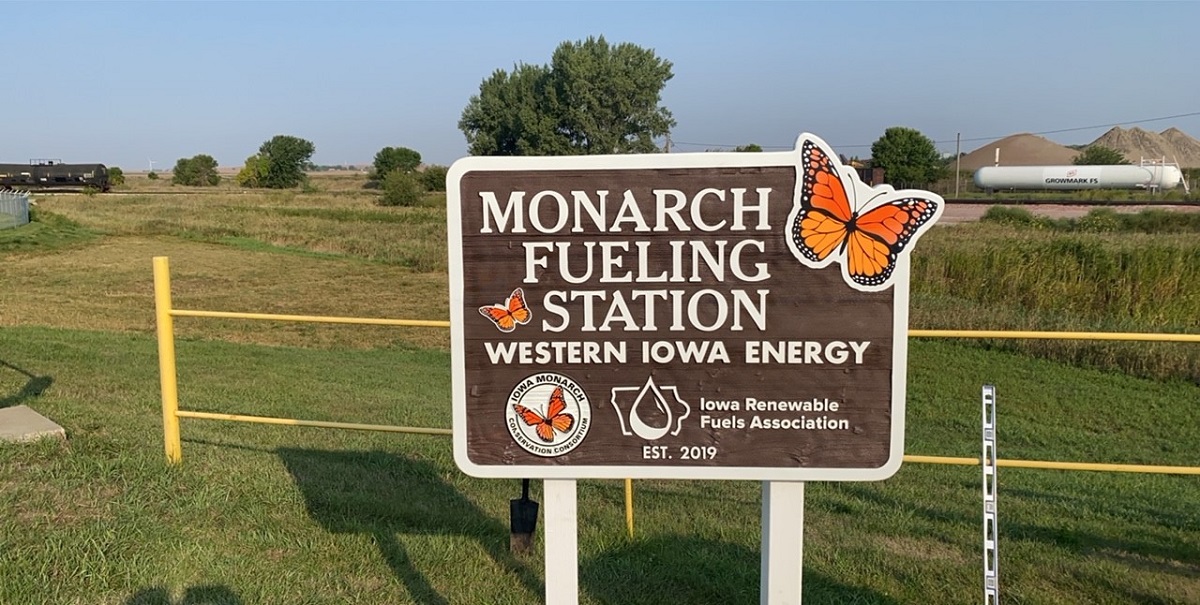 In 2019, WIE organized a food drive for local pantries and established a Monarch Fueling Station spanning roughly four acres at its plant near Wall Lake. Native grasses and milkweed were planted since monarch butterflies can only lay their eggs on milkweed.

“Biodiesel production is all about turning the seemingly useless into something useful,” said Kevin Bieret, Operations Manager of WIE. “We transform agriculture coproducts into green fuel. We see this Monarch Fueling Project as a new way to do that again, by turning something we have to mow into habitat to help fuel monarch butterflies. We are excited to take the next step toward providing much-needed habitat for monarch butterflies and other pollinators.”

“We are helping to keep the butterflies off of the endangered list,” said Wilson, “thus helping to keep restrictions low on our farmer owners of Western Iowa Energy — plus it is just the right thing to do.”

Biodiesel makes sense economically and environmentally for the state of Iowa, as well as the nation, and WIE is equipped to lead the way.

Western Iowa, with its committed workforce, strong sense of community, and quality of life,  should be high on the list for companies looking to grow and improve. Contact Western Iowa Advantage to learn more about the region, workforce, and available sites. Follow them on Facebook and LinkedIn.

Apr 20 2021
Denison and other county towns on the list for Wednesday Seth Varner and Austin Schneider are on a mission to visit every incorporated town in Iowa; they’ve dubbed their journey Visit939Iowa, with 939 being the number of towns they plan to visit. Varner and Schneider are roommates at the University of Nebrask...Continue Reading

Apr 11 2021
As a leader, it’s no surprise that one of your most crucial jobs is making sure employees are productive day in and day out. Many leaders have attempted to increase team productivity by introducing state-of-the-art technologies and testing the most successful workflow methods they could find. Unfortunately, they’re missing ...Continue Reading

Apr 9 2021
We know how to get down to business. We also know how to protect yours. That’s why we offer customized commercial coverages and dedicated support in the event of a data breach, equipment breakdown, and more. Trust in Tomorrow.® Talk to a Grinnell Mutual agent today.   View the PDF here. Continue Reading