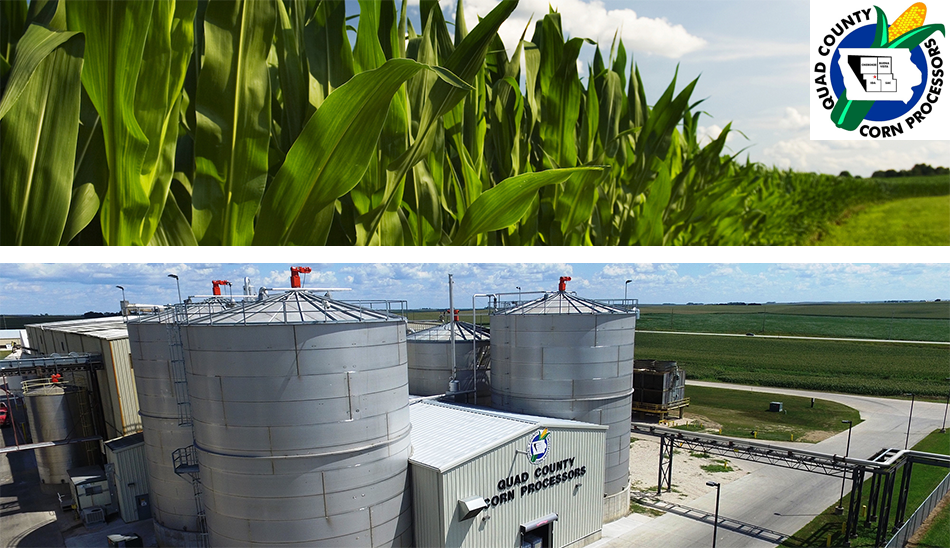 Quad County Corn Processors (QCCP) has been in business in Galva, Iowa, for 19 years as of September 1st of this year. In 2000, six investors bought an option on 102 acres of land just south of Galva, Iowa, near Highway 20. Their goal was to start an 18-million-gallon-per-year ethanol plant. These six individuals formed QCCP and raised the required equity for the project within a few weeks. The group had over 420 farmers invested in QCCP, which would ultimately increase the value of their corn, provide protein for livestock producers, and create 40 jobs, which boosted the local economy. The current QCCP site was chosen for its proximity to natural gas supply, reasonably-priced corn, high demand for protein, and good roads to gasoline terminals.

What is Ethanol, and How Can it Help Our Economy and Environment?

Ethanol is a product that has been produced for centuries. The first Ford Model T ran on ethanol! Ethanol is made from glucose of any kind. Quad County Corn Processors uses corn starch and the cellulosic fiber extracted from the corn kernel to create the ethanol. Ethanol is the fastest-growing renewable fuel because it is economical for consumers, improves air quality by replacing carcinogenic aromatics, reduces the U.S.’s foreign oil dependence, and reduces our carbon footprint by replacing fossil fuels. In 2017 alone, over 75,000 new jobs were created in the ethanol industry in the United States, making the ethanol industry a contributor to expanding the job market. Ethanol plants are helping create jobs and bolster the U.S. economy, especially boosting rural economies like rural Iowa.

Quad County Corn Processors started its ethanol production facility to add value to corn grown in the area by creating a unique and new, local demand for the crop. The business has come a long way since opening its doors in 2001. The first load of ethanol was transported out of the plant in February 2002. In 2011, Quad County installed equipment to extract corn oil. In 2012, they made a significant distillation upgrade, reducing natural gas usage and increasing ethanol production. In 2014, they installed Kernel Fiber Technology KFT™ to produce cellulosic ethanol and high-protein feed. They continue to stay at the forefront of the ethanol industry, using up-to-date equipment and always looking for ways to improve the value of the corn they process.

Producing 100,000 gallons of ethanol a day, which amounts to 35 million gallons a year, Quad County Corn Processors is definitely a local success here in Iowa. They currently employ over 40 hard-working employees and continue their reciprocal relationship with the local corn farmers in the area. Quad County Corn Processors is very proud of its patented Kernel Fiber Technology KFT™ process, which converts the corn kernel fiber into high-protein feed, more distillers’ corn oil, and cellulosic ethanol. The KFT™ process created by their research and development team was awarded the 2015 Industry Award by the Renewable Fuel Association for its dedication and commitment to the cellulosic biofuel sector.

Ethanol is quickly rising in its popularity due to its lower costs, high octane, and environmental benefits. Car manufacturers have also started making vehicles that have the capacity to use higher ethanol blends. A consumer purchasing ethanol uses American-grown crops, creates more rural jobs, and supports the Midwest instead of the Middle East.  Quad County Corn Processors is helping boost the local economy here in Iowa, creating jobs in the renewable energy sector for local residents, and helping the environment overall by creating a cleaner, greener fuel source for the nation.

To learn more about Quad County Corn Processors and their products visit their website.

Oct 4 2019
Eventide’s vision for a new facility is to offer a higher quality of life and a higher continuity of care to those who have invested their lives in the community and now need skilled nursing care. The new facility will be constructed on the former Crawford County Memorial Hospital site alon...Continue Reading

Sep 27 2019
AMES, Ia. — Iowa's small-town manufacturers are in a crunch, state leaders say. They don't have the talent pool to expand operations, and they don't have the funds to experiment with new technology that could boost productivity. But Ronald Cox, service director for the Iowa State University Center for Industrial Research, believes his ne...Continue Reading

Sep 25 2019
The Iowa Economic Development Authority (IEDA) announced two new competitive funds to support the mitigation of dilapidated, state-owned properties that can be redeveloped for economic development purposes. Specifically, funding of up to $6 million has been allocated to the following two funds for current fiscal year (FY) 2020 through F...Continue Reading