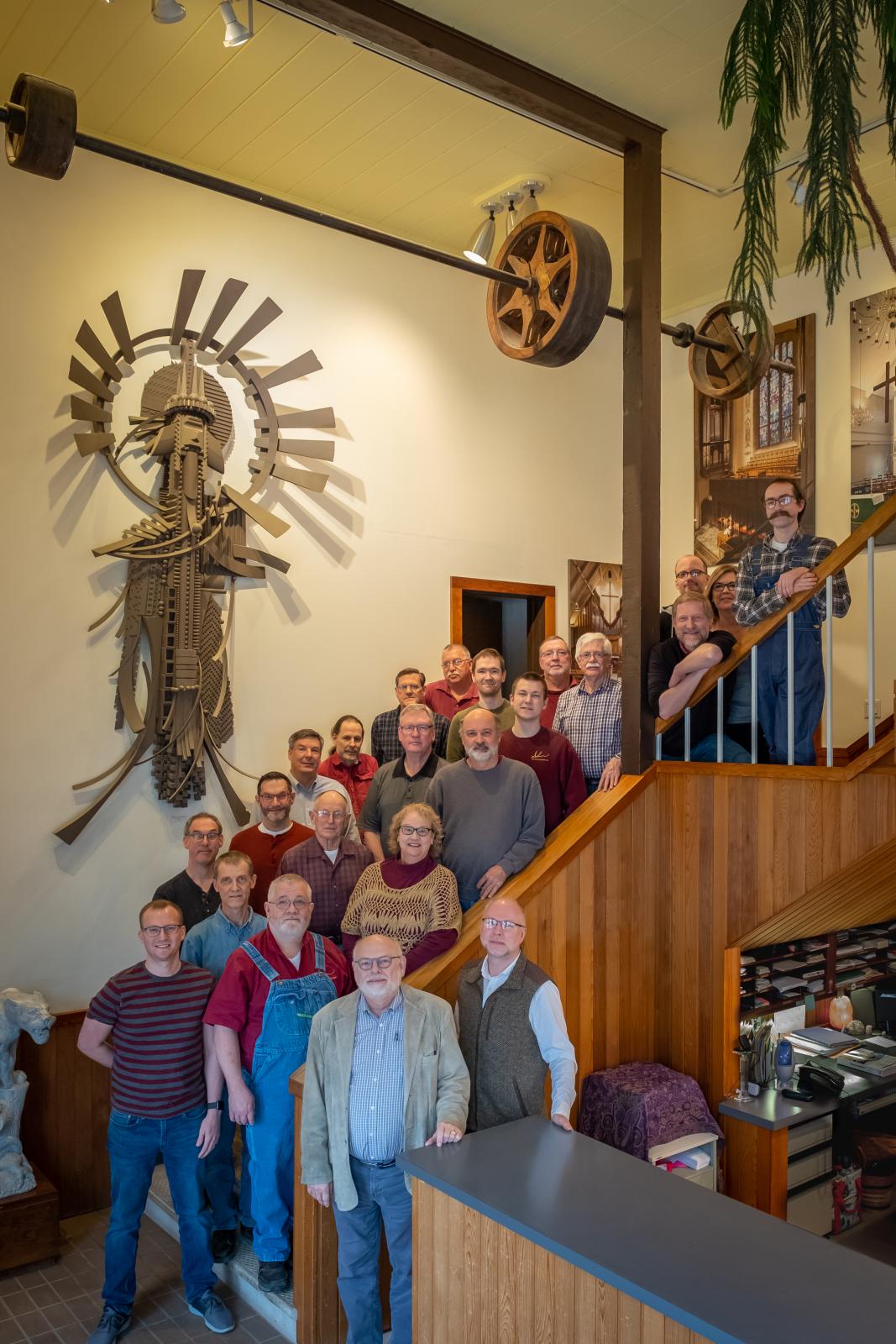 Western Iowa is home to Dobson Pipe Organ Builders, a company where craftsmanship, art, and ingenuity are fueled by tradition, community support, and a skilled workforce. Company founder, Lynn Dobson, grew up on a family farm in Lanesboro. When he decided to open his business in 1974, he rented shop space in Lake City; and Lake City has been home to Dobson Pipe Organ ever since. In 1979, the business moved to its own quarters on the northeast corner of the city square in a remodeled building from the late 1800s. As the business has grown, they have added on several times to accommodate bigger projects and a larger crew.

Just this past February, Lynn Dobson retired, making John Panning — who has been with the company since 1984 — owner and president. He too has good things to say about the business’ Calhoun County location. “We have a lot of pride in our town, Lake City, which shows in well-kept houses, an active city square with vibrant businesses, and a variety of activities and organizations,” Panning said. “A good school system, affordable real estate, and proximity to Carroll and Fort Dodge are helpful factors when we’re hiring.”

Panning said the organ building business is thriving. “It would be understandable for people to think that the pipe organ is obsolete, but there are dozens of builders across the U.S,” Panning said. “They’re not all as large as we are — with 20 employees, we’re one of the larger firms in the U.S. —  but dozens of new pipe organs are built each year for churches, universities, concert halls, and private residences. And while it may seem that most churches now have a band to provide music, pipe organs are again being commissioned by churches that for the last several decades relied on a singer/cantor with a microphone and a guitar. Interestingly, the largest growth in new organs is coming from Roman Catholic churches.”

Dobson Pipe Organ has recently been commissioned to build a new four-manual organ for the Parish of Saint James, King Street in Sydney, Australia. “Everyone is quite excited to be working on this project, which to some degree mirrors the organ we built for Merton College in Oxford, England in 2013, our first overseas instrument,” Panning said. “Both were commissioned by institutions that have well-known choirs and wanted a pipe organ whose primary function is accompanying singing. We’ve made something of a name for ourselves in this area, and the success of the Merton organ inspired the Sydney folks to trust us with their project.”

Panning said the same people who build each organ always travel to install them. “We have 20 full-time employees and three part-time,” he said. “It is indeed very specialized work, and it is always difficult to find employees. About half are from the local area, and the other half have come from farther away. Regardless of their education, skills, or experience, there is always a lot of on-the-job training because the work is so specialized.”

“Fine woodworking is an important skill, since not only are the organ cases (their visible cabinets or housings) made to the quality of fine furniture, but many of the internal parts are wood as well,” Panning said. “Another valuable skill is the ability to play the organ, since a knowledge of the music is an important asset for those who work on the pipes to give them the proper sound. About half of our crew are trained organists or musicians of some other sort.  Experience with electrical wiring, leatherwork, welding, and other metalwork is all valuable.”

Panning is himself a musician. “I’ve been one of the organists for St. Paul’s Lutheran Church in Carroll for over 20 years, and have served other churches in Iowa and Wisconsin before that.” 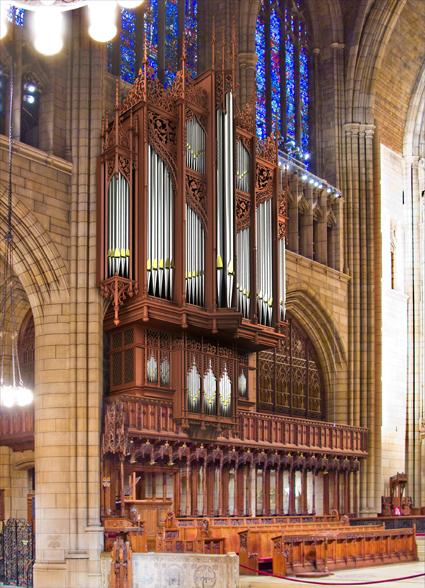 Installation times for new organs can vary tremendously depending on the size of the instrument. A very small one can be set up, voiced, and tuned in a week. Panning said their largest project to date — St. Thomas Church in New York City — required over one year.

Voicing is the meticulous artisan process of manipulating and adjusting the pipes of an organ to make them speak correctly with the right sound and the desired volume, according to Panning. Most organ pipes are made of relatively soft metal, typically some alloy of tin and lead, making them easy to modify in a dozen or more places with specialized tools.

“This process of adjusting the pipes is very important, since each church or concert hall has its own characteristic ‘acoustic,’” Panning said. “Some rooms absorb certain frequencies, making those pitches seem soft, or they may reflect and reinforce other frequencies, making the pipes that produce those pitches seem loud. The voicer’s job is to adjust each pipe — there may be thousands of them in a single organ — so that each one is working correctly and properly balanced in strength with its neighbors.”

While building new organs represents the lion’s share of their business, restorations and service work are an important aspect, too. “We are currently restoring an organ from 1899 in Independence, Iowa, and we’ll restore a similar organ from 1892 in Owatonna, Minnesota next year,” Panning said. “There aren’t many organ tuners in our part of the Midwest, and we take our responsibility as stewards of pipe organs in our area seriously. We maintain about 150 organs, chiefly in Iowa and Minnesota.”

When asked which organ was his favorite, Panning said, “This is like asking a parent which child is his or her favorite. Every one is beautiful and literally unique, and each is connected to clients that have become good friends over the courses of the projects, since they typically span several years from contract signing to completion.”

Western Iowa, with its committed workforce, strong sense of community, and quality of life,  should be high on the list for companies looking to grow and improve. Contact Western Iowa Advantage to learn more about the region, workforce, and available sites.

Oct 30 2020
AD: Will more companies be re-shoring or near-shoring as a result of the global pandemic? Jensen: For certain, most companies are closely examining the options available to them to avoid future supply chain interruptions. Part of the challenge of making a decision on a future sourcing direction is that this story isn’t over...Continue Reading

Everybody Knows this is Somewhere

Oct 29 2020
Double-digit unemployment — that’s where my career in economic development began. As the country struggled to pull itself out of the Great Recession, I spent my days in workforce and economic development activities ranging from assisting displaced workers to providing resources to businesses to aiding communities in creating a better tomorrow. ...Continue Reading